A few of the technologies developed successfully at Centre for excellence IISC, IITB, IITM, IITD under the Nanotechnology Programme are:

Development of a hand- held device for monitoring blood based indicators for diabetes other than just Glucose like Glycated Haemoglobin percentage with respect to total Haemoglobin and its Product Launch. This technology and the product being developed on a portable platform are expected to be of relevance to urban health as well as rural health monitoring due to cost factors.7 Indian patents and 1 US Patent have been filed. A Start-up company “Path Shodh”   has been incubated at SID, IISc Bangalore in September 2015.

Microfluidic chip with channels on PDMS/PC/PMMA, to detect the flow of PS beads/cells through the channels are used for flow cytometry system for blood cell counting of atleast 20 L/min with integrated optical system consisting of Light Emitting Diode (LEDs) of nominal wavelength 633 nm and 488 nm with a power of 10-20 mW. Two prototypes have been developed using microfluidics technology, one on cell phone and another on the digital camera platform.

Two prototypes for soil moisture sensor developed and tested – one with Temperature pulse probe and second with electrochemical potential principle. Also a cantilever based soil moisture sensor system has been developed which has a wireless connectivity. Further work is continued on the instrumentation aspects of wireless sensor nodes for agricultural systems.

A 4 element Metal oxide gas sensor array chip has been developed to sense CO2 gas in the range of 350 ppm to 1000 ppm. The sensor consumes extremely low power of about 50mW for 4 sensors, and is selective against gases such as SO2, CO and NOx.

A low cost sensor platform for determining ionizing radiation using sensors based on organic semiconducting materials has been demonstrated. 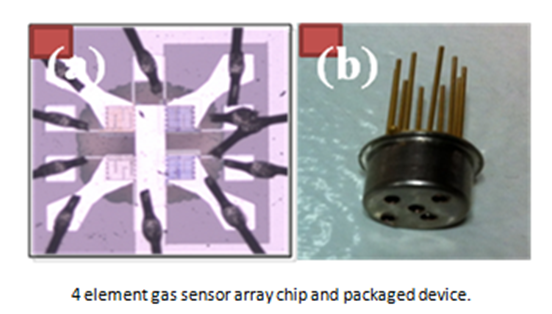 Design, fabrication and testing of a Nanocrystalline silicon MEMS pressure sensor in the range of 1mbar to1bar.

A top down process has been developed to create transistors with nano needles on top of the gate oxide, to sense intracellular action potential. The process is capable of creating array of Nano needle Gated FETs (NGFETs).

A system prototype of wireless sensor for air quality has been developed for environmental monitoring with following capabilities:

About 70 patents have been filed under the projects sponsored by Nanotechnology Division. Some of the filed patents are as follows:

Over 1100 research papers have been published and many proof of concepts for various devices have been demonstrated under the programme.