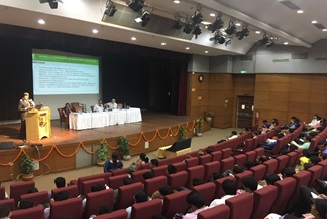 A session was convened by NPCI along with MEITY on 14th July 2017 to provide training on Digital payments to the 2015 Batch of 175 IAS officers. The session was attended by the Secretary MeITY, Joint Secretary MeITY along with few directors and officials of DOPT. A presentation was made on all the key modes of digital payments; IMPS, UPI, BHIM, AEPS, BHIM AADHAR PAY, NeTC, NACH and BBPS.

Objective of the session was to sensitize the new batch of probationers on different digital payments initiatives of Govt. of India and benefits of them in day to day life of citizens. Benefits of the digital modes of payments accruing to Govt. was also explained to participants. Demonstration of Digital payments products (BHIM Aadhar & BHIM) were also given to officers. A video conference session on promotion of Digital Payment and its modes was organized by Ministry of Panchayati Raj on 21st July, 2017 chaired by Additional Secretary, MoPR. The workshop was attended by representatives of 18 States over video-conferencing. The presentation was given by MeitY and NPCI presented on the various modes/channels available for the Panchayat for digital transaction.

Importance of linking of Aadhaar and mobile number with bank account was also discussed during the conference. The session also brainstormed on use cases which can be developed to integrate the digital modes of payments in institutions under MoPR. A Presentation on Bharat Bill Payment System and BHIM was conducted by NPCI in the Review, Planning and Monitoring meeting of Ministry of Power at New Delhi on 22nd July 2017 chaired by Hon’ble Cabinet Minister of Power, Shri Piyush Goyal and graced by the presence of Central Secretary, State Power Secretaries etc.

Shri Piyush Goyal, Minister of Power announced that top 5 States to do 90% digital transactions in power utilities and 75% only through NPCI products will get extra budget from the government. Benefits of onboarding of Discoms onto BBPS platform for the utility service providers and also the customers was explained to the participants. The event closed with a FAQ session on BBPS.

A workshop was organized by Ministry of Road Transport and Highways on 26th July 2017 at New Delhi to explore the possibility of using National Common Mobility Card (NCMC) in State Transport Undertaking (STU) buses. The NCMC is a contactless smart card which can be used for multi-modal applications on transport, toll, parking etc. The workshop was attended by representatives of 11 STUs.

A presentation given by MeitY on modes of digital payments and NPCI on NCMC cards. Participants from STUs brainstormed on use cases for adoption of NCMC. NPCI has done pilot run of NCMC card at BMTC, Bangalore. Pune, Maharashtra, UP SRT and DIMTS presented their strategy , technology solutions and roadmap to enable digital mode of transactions for the commuters in the respective states. 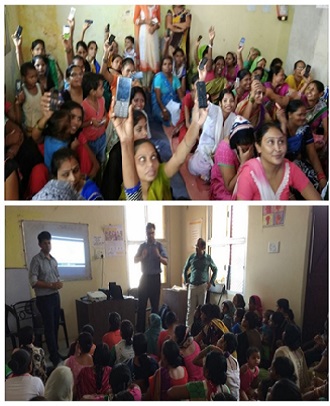 A training session on RuPay/BHIM/*99# was conducted for women SHGs on 19th July 2017 . Women SHG members from a local NGO participated enthusiastically to understand modes of digital payments. Training focused on explaining how to download the applications, use them, prerequisites to use them and benefits of using digital modes of payment. Participants had an experiential learning during the session when trainers from NPCI demonstrated real time funds transfer transaction through BHIM. Women members shared their experience on using BHIM and posed queries to the trainers from Digidhan Mission on security aspects.

Intervention with Ministry of Panchayati Raj NPCI was part of the panel discussion on Digital Village held on 27th June 2017 under Ministry of Panchayati Raj at Bhopal.

Intervention with employees of Farmer based organization- ISAP 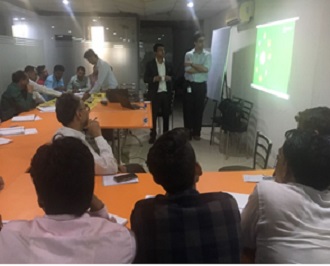 A presentation on BHIM and its schemes was given by Digidhan Mission team to Power Finance Corporation officials on 4th August 2017 in their Delhi office. The workshop was attended by around 50 officials.

A presentation on Digital Payments modes and its schemes was given by Digidhan Mission team to Department of Animal Husbandry officials on 11th August 2017. This meeting was attended by 40 officials of ministry.

2. Meeting with Department of Fertilizers on PoS manufacturing in India (11 Aug 2017)

3. Meeting with Ministry of Panchayati Raj and States on digital modes of payment (14th Aug, 2017)

Ministry of Panchayti Raj organized a Central Executive Committee meeting in which nodal officials from Panchayti Raj Departments/SIRDs of 10 states participated. This meeting was chaired by Secretary, MSME. Discussion were made on feasibility assessment to conduct pilot .projects on integrating Bhim Aadhaar as Payments mode at Gram Panchayats.

4. Meeting with Ministry of Defence on digital modes of payment (14th Aug, 2017)

The meeting was chaired by AS (Defence), JS (Defence) and other members of the ministry. A presentation on the various modes of digital payments was made by NPCI and the Defence Ministry enquired about solutions for defence canteens, and petty cash distributed to soldiers.

A presentation on Digital Payments modes and its schemes was given by Digidhan Mission team to Ministry of Small Medium Enterprise officials on 16th August 2017. This meeting was attended by Sr. officials of ministry and chaired by Secretary MSME.

6. Meeting held with Department of Health and Family Welfare to discuss their Action Plan (17th Aug, 2017)

9. Meeting with Director, School of Open Learning and Principals of 3 colleges (22nd Aug 2017)

Discussion were made with School of Open learning on creating awareness on digital modes of payments among student community. Meity will conduct promotion event at SOL to communicate benefits of digital payments to students

Digidhan Mission team had given presentation to Power Finance Corporation and 40 State Discoms to onboard BBPS and adopt Bharat QR Code for Bill payments.

11. Meeting held with Department of Animal Husbandry, Dairying and Fisheries (23/8/17)

Department informed by MeitY about emphasis on BHARAT QR, BHIM (SBI requested to facilitate) Department has requested support from MeitY to provide promotion material for Bharat QR/ BHIM family which can be circulated at various touch points